Did I mention I was picked to be a Best Man this summer? Well, that happened. Which means that one of my duties was to organize the Stag Do.

Here’s post 1 of 2 about the props I made for my friend’s Stag Do, and a few things I learned along the way.

Ladies and Gentlemen… a sword and shield on a budget.

I Am Your Shield

The soft shields sold in shops are made, rather understandably, for children. This means that for the price, they’re pretty small and wimpy.
This is how I made something much bigger and better on a budget, citing plenty of sources!

It all started with a foam pool float from Poundland.

This got a few coats of black paint, and a little spray laquer.
Using spray paint was difficult, considering I live in an apartment… in the end, time was split between painting inside over a plastic tablecloth, and spraying out in the bin store (a short yet cumbersome trip through several doors).

The handle (in a move proclaimed as “genius”) is a Poundland flip-flop, attached using a glue gun. 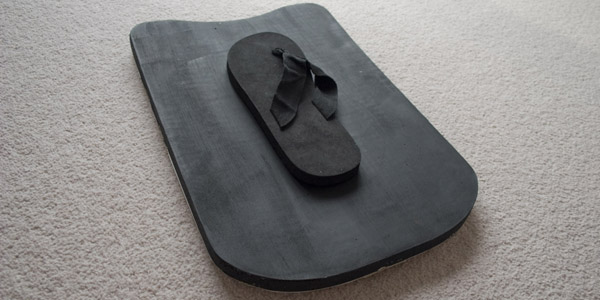 The patterning is a mixture of gold duct tape (YES) and gold card (which I printed the pattern onto the reverse before cutting out) glued on.

Late in the game, when a couple of the shields were already finished, I changed my mind. They shouldn’t be black, they should be white!
…which would be impossible to spray paint over black in the days remaining.
A quick trip up the The Range (who I should have got a loyalty card for, the amount I’ve shopped there these past few months) brought some A3 Watercolour Card.

One sheet of white card was slightly too small to cover the whole face… luckily, duct tape hides all! 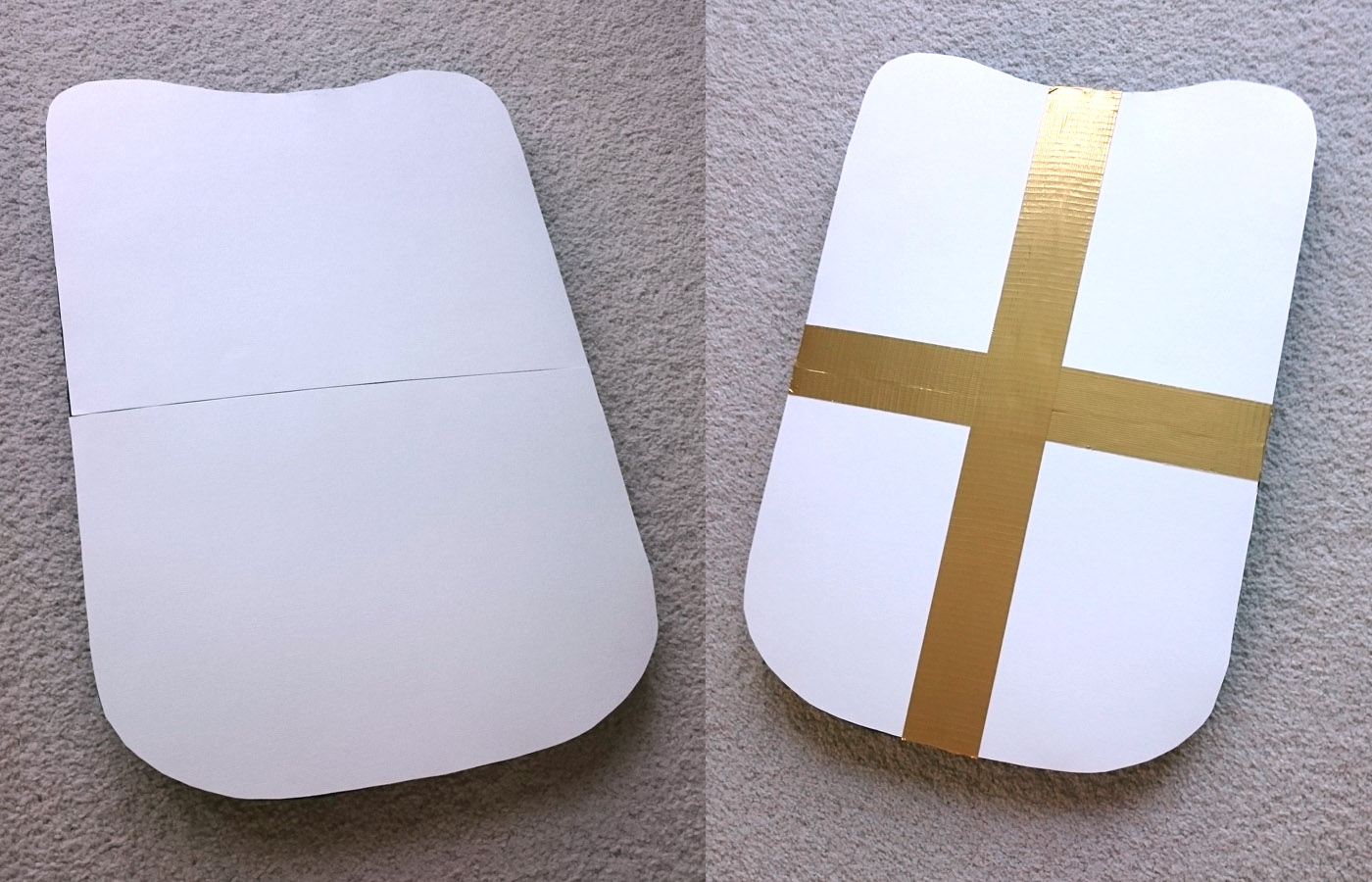 This Is Your Sword

A princely £1.50 each from Toyland, again these were made for children… so the foam would bend at the slightest tap. Disappointing.
After dissecting one to see their inner workings (answer: a hollow plastic tube runs half the blade’s length), I gave the swords bracers.

My choice of reinforcing material was downgraded from metal curtain rods (!) to garden bamboo cane; the kind of rod used for holding up plants. Cropped to length using pliers, each piece was superglued on one end and down the side, then inserted.
The open end was plugged up with some sticky-backed floor protectors.

Careful testing revealed that you had to give it a hell of a swing before the end could fly off and launch a garden rod at your target.
This only happened once on the day.

Finally, a paint job. A regal gold (with black undercoat) was chosen for the handles, while the blades got a coating of white paint to make them stand out. 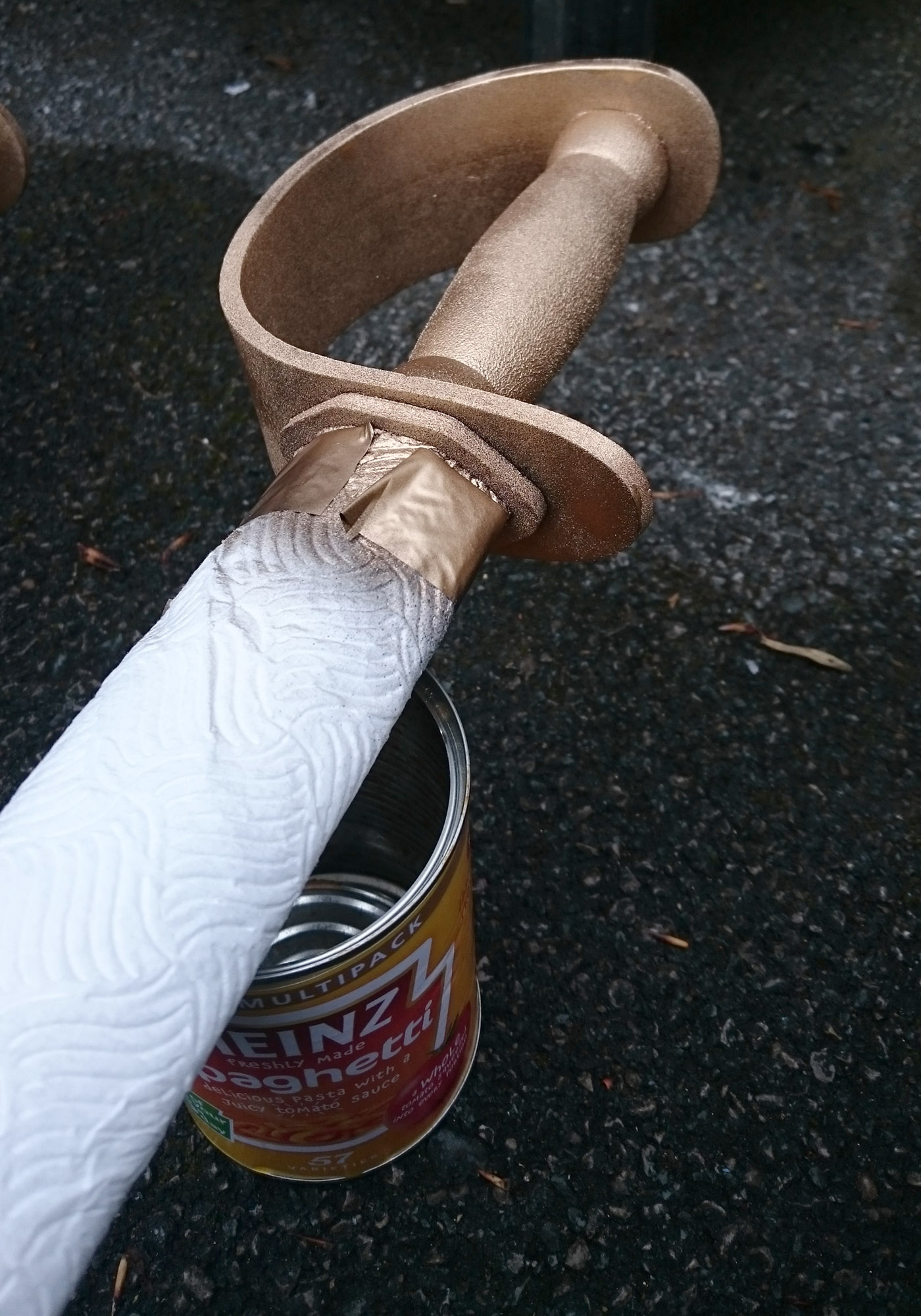 Kitchen roll and sellotape was used to block off areas the first time, while freezer bags were used the second time. Spaghetti tins, stones and careful balancing came into play for setting the swords down to dry. 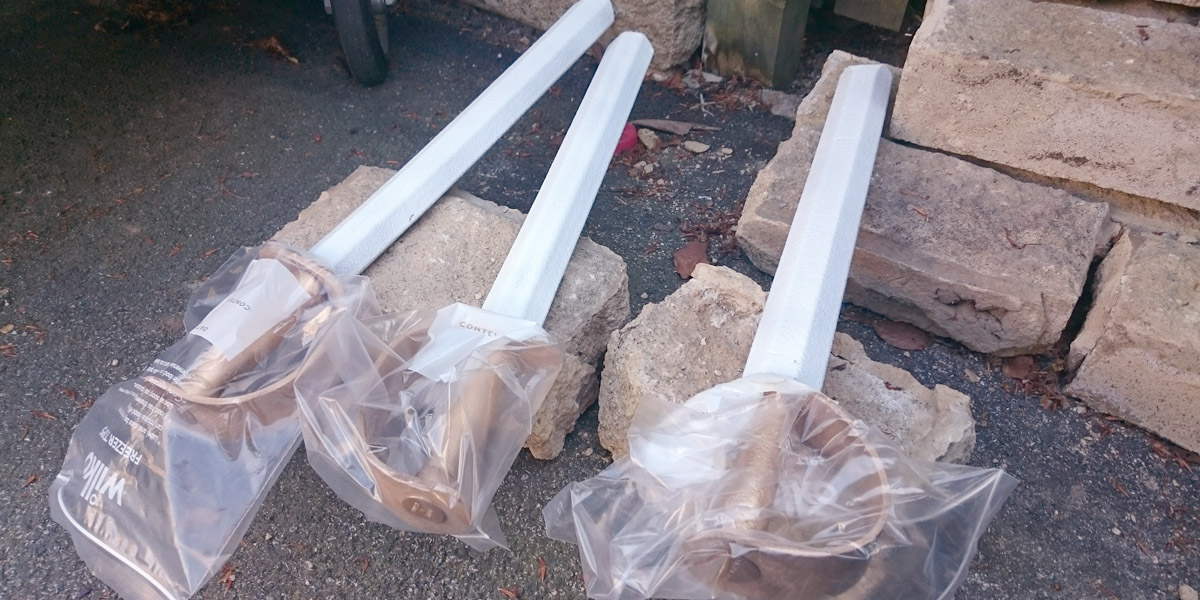 I made six sets. With a dozen or so people attending, that seemed like a nice balance. 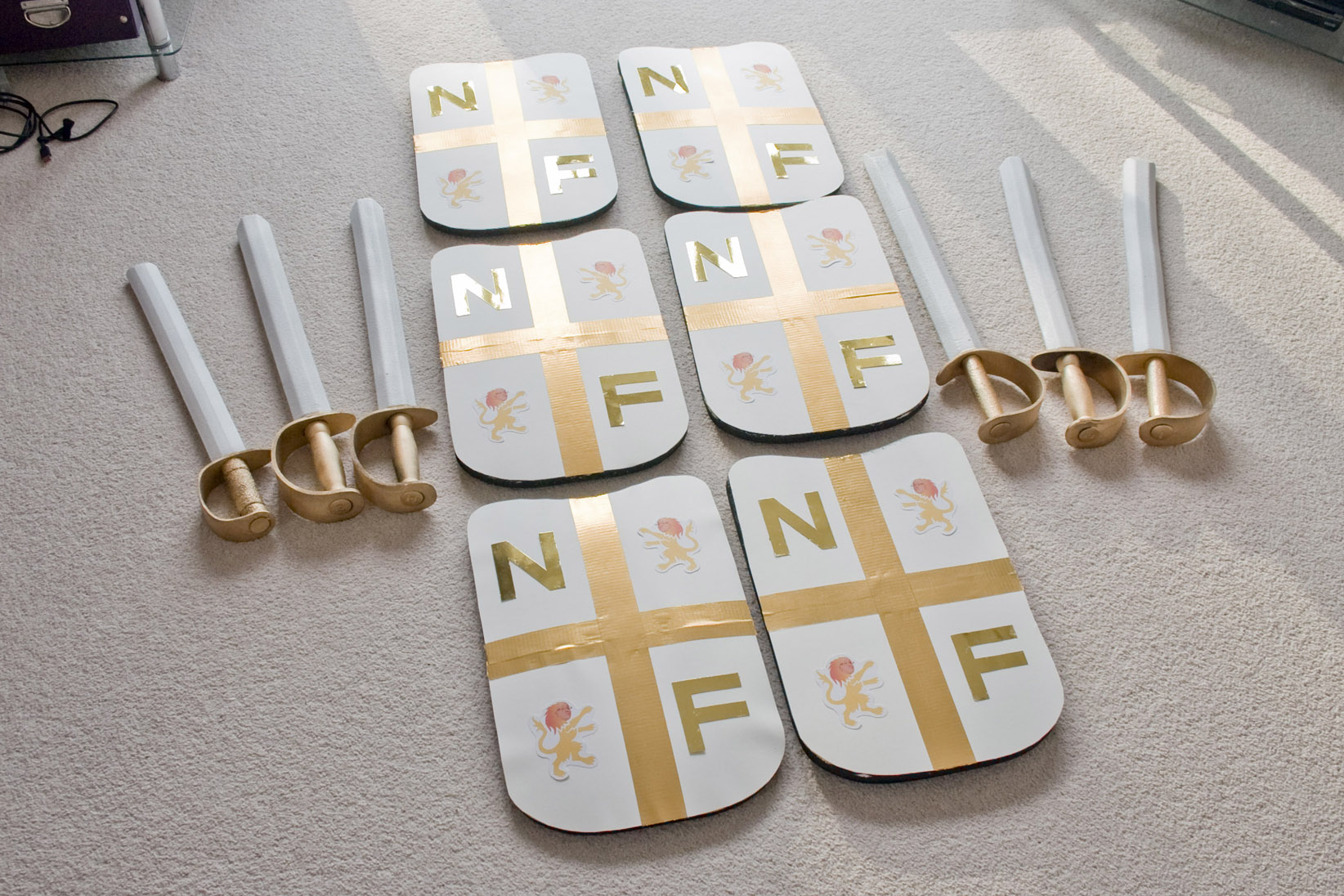 I still had to get these to the starting pub, so they were crammed into two very large bags (that I’d kept from buying all this stuff in the first place). 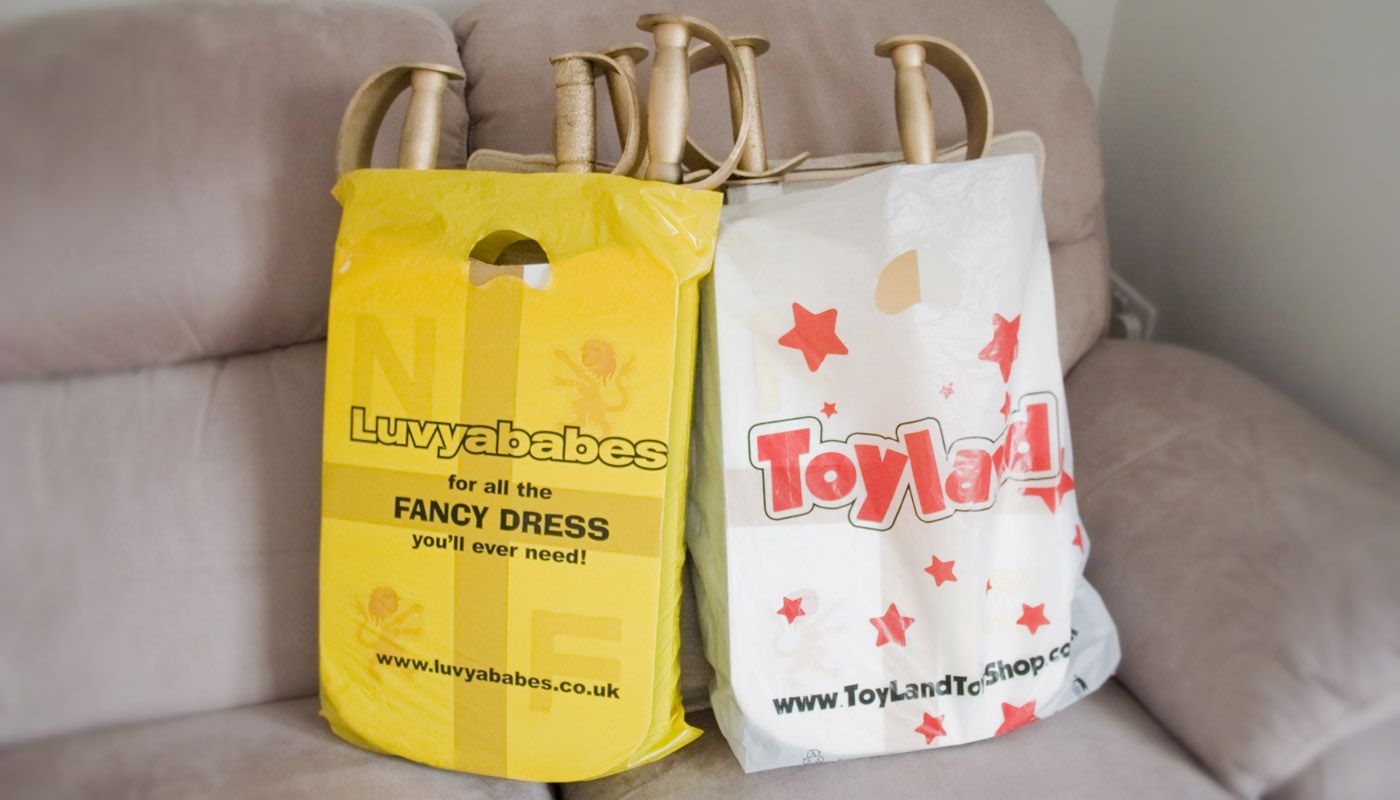 A Grand Day Out

Things worked out nicely in the end, but I’m going to highlight two things that put a dampener on this neat idea: One unforseeable, and one from lack of thought.

A few days before the Stag Do there was a terrorist attack in London. The UK was placed on critical alert, and all major cities were suddenly filled with police… some of them armed. And here I was, in charge of a load of blokes (some with backpacks) wielding swords through populated areas…

All Stags were instructed to dispose of their props at the first word of warning / sign of danger.
Turns out no-one in the North was fussed. A few randomers were impressed, while one took a damaged set from us before it could be binned. 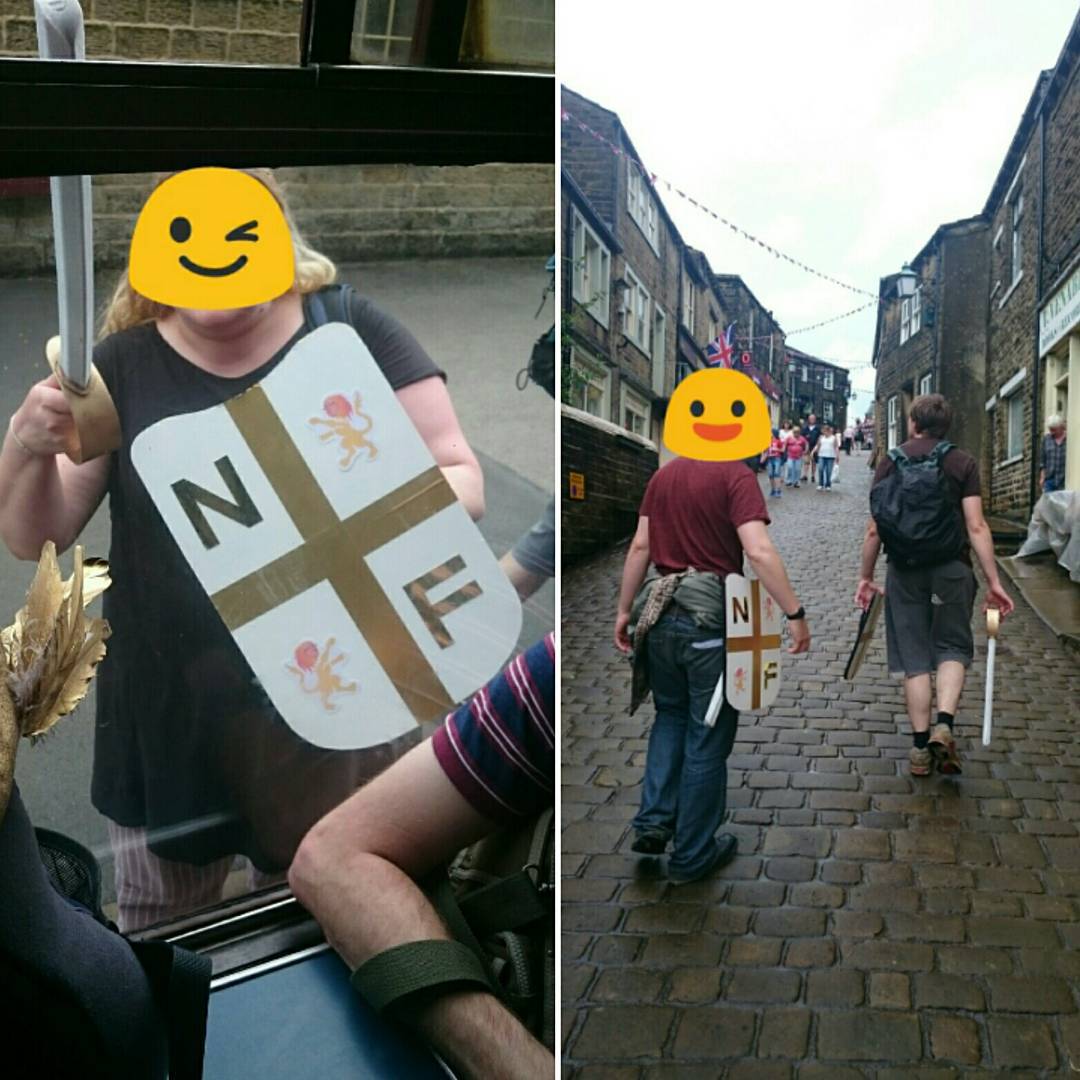 Secondly, an unfortunate implication.
N.F. is the groom’s initials. It does not stand for National Front. Even when emblazoned on a shield with a St George’s cross and carried around by a bunch of white boys.
OOPS.
This is the downside to secret projects… no ‘outsider’ to point out the obvious.
Thankfully, any comments heard on the subject were jokey – although a few of the shields may have mysteriously “lost” a letter as the day went on.

(Oh, and the white paint flecked off the sword blades faster than expected, getting onto clothing. It still wiped off. That’s a terribly minor issue compared to the previous two).

And there you have it – instructions for anyone who wants to craft their own set of custom swords and shields. They were a hit!