I told you last time that I had to prepare for Valentine’s Day… my friend’s birthday. As it was her 30th, there was actually a really good surprise party that weekend, but that’s beside the point.

I genuinely didn’t have anything planned for this year. About a week before the 14th, I decided to wear this felt badge/brooch from Made By Millie on the day itself (which was spent at work) – It’s like those stereotypical sailor tattoos, a heart with a banner across, only it says CAKE instead of MUM. 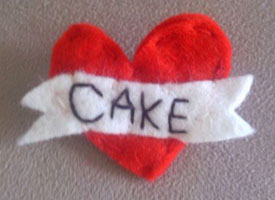 That’s where the idea came from: Rather than another round of cards like people got last year, this year the gifts would be a variant of that heart. So:

Each cardboard heart has a safety pin on the back, so they do actually work as badges. A self-imposted challenge was to avoid putting things like a partner’s name or, well, MONEY. CIGS, DANCING and PONIES were thanked for with smiles. CARDIES (short for ‘cardigans’) was called out for making the mid-20s recipient sound like an old woman. SOAPS was quietly filed away.
There were also two cards, oddly enough both for married people – Not married to each other, I must clarify:

At least I didn’t do it for any kind of *ahem* personal gain, because as Willy Wonka would say, “You get NOTHING“… unless you count the crude poem on office paper from the married man. Oh. Neat. Thanks.