…all leading to the result below. I’ll update this post with a link to his website when it’s up and running.

The third item I present to you is the result of a cold. While making their Emergency Escape Podcast, John of Final Boss Fight (who, like me, currently has no spouse) went for the phrase “Tech Ninja Dojo”, ended up at “Tech Ninja Dodo“, and decided he wanted to see that. We both have common grounding, but whereas I specialised towards imagery, he trained more to the production side of things. Anyway, he had a go and sent me his file, asking me to implement improvements.
Naturally, I went to town on it.

Once that was in the bag, I gave him a couple of pointers, along with the source file to use and learn from.
At one point the dodo was getting additional equipment, such as broadband cable Ninja rope and Ubuntu-shaped throwing stars, but we agreed to cut them in that they added too much visual clutter. At least it got to keep the sword, which is forged from the sharpest material known to man – plastic clamshell packaging. 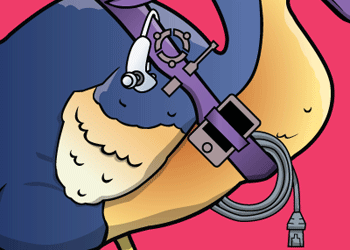 That’s your lot for today. Go read a book or something!