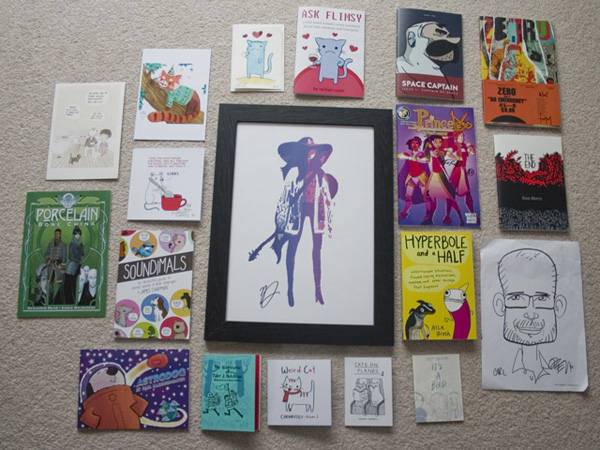 Draw more.
Practice makes perfect. Duh. You find your own style, fix proportion problems, and get ideas down in your sketchbook – characters, settings, plot points – that can be used later. Nana Li’s book is a compilation of people she’s drawn on the train. Although after my last post, i’d say do it in moderation.

Don’t overcook it.
In a project, time spent is not directly linked to quality: You could have a Team Fortress 2 on your hands, or it could be a Duke Nukem Forever. Tyler J. Hutchinson said that you should get 80% of the way there, then tidy that up. There was one famous painter who would be escorted out of art galleries… after he’d gone in and tried to finish his own work in their exhibition.

Start small.
Don’t bite off more than you can chew, in both the scale of projects and the meetups you’re selling at. You don’t want to debut with hundreds of full-colour hard-bound comics, at a convention with hundreds of sellers, then realise when you only sell a few that you now have money problems. Aim for 20 copies and 16 pages, rather than 200 pages and copies.
A surprising amount of comics at TB were simple black & white comics on office paper, stapled into book form with black ink on coloured paper for a cover. Some were A6, one colour (for example dark blue) and accordion folded. Risograph machines (single-colour roller printers) provide a cost-effective solution, as do laser printers, and screen prints using UV sensitive ink are an intriguing-sounding option to research.

Do it for the love of it.
Some of those at the tables get to draw and illustrate as their primary full-time job. They appreciate how lucky they are. Few turn a significant profit. Go in not expecting to make a penny. Obviously, those with their minds in their ledgers are not usually the artistic type.
To help with a lack of funds, some run primarily as webcomics, which can be made into compilations later on. Guys can do guest comics for each other (or in publications like The Phoenix), and a few folks had collaborated on an anthology themed around colours.

Comics are great for Dyslexics.
Thought Bubble’s founder Lisa Wood (AKA Tula Lotay) is dyslexic herself. She pointed out in an interview how comics are much more accessible than a novel for those with reading difficulties. Nice compartmentalized phrases, from visually defined characters. Kev F Sutherland also mentioned this in passing, although I didn’t quite catch whether it was his own experience or one of his pupils.

No man is an island.
One of the points of Saturday: Retrieving knowledge from others. Matt Dyson (who works solo and as part of a community group) said he cannot understand those who keep their techniques secret, as if making a little lightbulb go off over someone else’s head was a bad thing.
Also, get people to proof-read your stuff, and chip in with ideas if you’ve hit a snag.

Everybody has their own art style.
Can you create photo-realistic paintings to make Michelangelo weep? Or are your pen drawings something that your 5 year old daughter would say were rusty? Doesn’t matter. It’s the writing that’s important, and everybody likes different looks. A couple of years ago, I saw one comic which shall remain nameless that I would definitely put in the latter of the aforementioned categories. But it was selling, and the creator was happy. Can’t ask for more than that.

Audiences vary. This can be used to your advantage.
A lot of comic buyers and creators there were women. And not everyone was white. Several were American (slightly off-point, but notable). Aspirational and universal stuff, comics.
My comic book ideas are not “two guys on a couch talk about videogames”; they’re a little odd-ball. I realised one morning, while watching SpongeBob SquarePants, how mad it is, and figured that weirdness does not matter one jot. It can be a plus. Look at the photos above. Stories about ghosts, commuting, sailing, superpowers, even Homer Simpson in Die Hard. Do you want to limit your audience to people lacking in imagination or scale in their escapism? 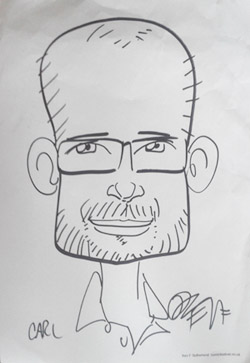 An artist from The Beano drew me!

That’ll do, pig. My own plans are forming and changing, getting smaller but in turn more achievable. Visiting a friend for an editing sesh this weekend. If you find me selling next year, have a natter and buy something, would ya?

p.s. I missed this out and shouldn’t have. There was this one girl, Kaya Oldaker, just wandering around. She didn’t have a stand, but her more socially buoyant friend was showing Kaya’s creature-filled portfolio to everyone. I found it impressive stuff. She’s almost done making a creature-filled book called “The Increasingly Absurd Endeavours Of Gretchen Goosander“.
See Smiley Kaya’s DeviantArt gallery here. 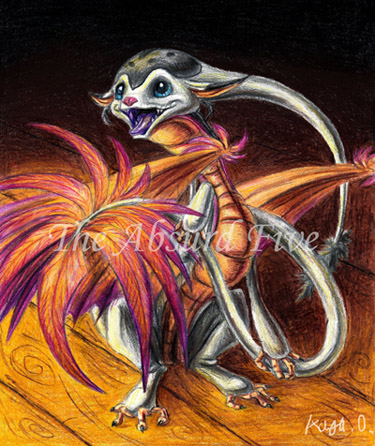