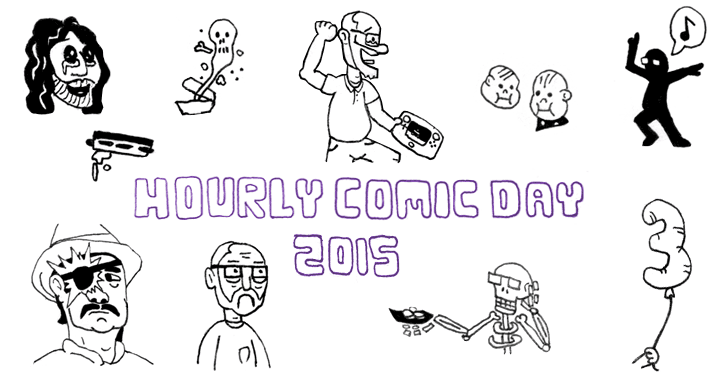 As usual, I didn’t do it in real-time. While in 2013 it was on a Friday (so I had all weekend free to draw, ink and scan), this year’s being a Sunday meant i’ve been doing all that in evenings through the working week.

Not much remains to be said in terms of preamble. Click the image above or this link right here, and it’ll take you to the full thing.

It’s time for a round of footnotes!

I got a similar card years ago.

The forum that used to host Hourly Comic Day has been discontinued: It’s all in social media now. Search for #HourlyComicDay on Twitter or Instagram or what have you. Conveniently, the names i’d recommend to start you off show up top in the Twitter results: Kristyna Baczynski, Sarah McIntrye and Graham Annable. Go, read things!

p.s. One part of my Comics Masterplan is collecting these hourlies into a Volume… there’s a balance to be struck between page count and panel size. Working titles? “A Half-Decade of Mundanity” or “5 Grim Years Oop North”.