Earlier in the year, when I was working on various print layouts, there was a secondary curio that I never showed you blog-people (though a few Facebook friends will have been privy to it).

The woman I was speaking to at the time pointed to some cupboards in their room, the faces of which were composed of various shades of wood. She then asked, as an example of my Photoshop prowess, if I could make them the same colour. Alas, I didn’t get a reference image at that point, but one afternoon I took a few pictures and set myself one hour of ‘shopping time.

I changed my breadboard from dark to light wood, both in the foreground and the toaster’s reflection.

Then I made a miniature version of myself to sit on the counter.

To finish off, I removed a plug socket from the wall. 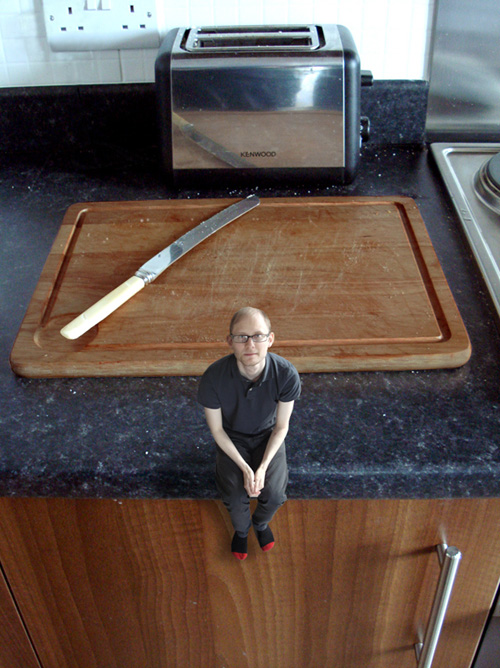 A few little pictures to complement the above:

Above left is the original photo of the breadboard, before colour balance adjustment and any further tweaks. In the middle is me on a chair, waiting for the Temporary Miniaturization Ray to power up. The right image shows the differences between the original and finished image.