One of my pastimes is to tinker with wikis. I amend text, fix references, apply cleanup tags, the usual. Sometimes images come into it: Hence today’s update.

For Wikipedia itself, it’s mainly been photo and diagram cleanup. The one i’ll highlight is the diagram on Xbox 360 technical problems, as it required some learning of EPS file formatting. And because i’m a PS3 owner. Teehee.

I’ve also done an illustration or two for the Discworld L-Space Wiki, as posted in 2010.

The biggest changes i’ve made have been as a head of Carmageddon Wiki, which I found in a pitiful state and resurrected a few years ago. It’s an ongoing battle against Wikia to fix the format whenever they change something – Maybe the Carmageddon developers will take us in? – but I’ve made logos, formatted infoboxes, tracked down box art, supplied screenshots, written pages, put everything into categories… It’d be easier for you to just go and look. The site’s growing all the time since a few other users joined in, and a new entry to the series was announced, so there’ll be plenty to do!

One more: I vectored up the the Simpsons Wiki logo (and made their old cloud background seamless), combining Homer’s head from The Simpsons Movie with the Wikipedia logo cleaner than before. To fit with the boundaries of the space he’s sticking his head out of a hole, but it fits by being a bit humorous. 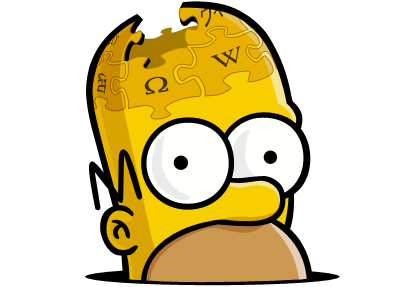 Unfortunately, I left it so long to tell you that they’ve moved, and the previous logo has vanished from their servers. Can’t compare this to the old one.
“D’oh!” indeed.