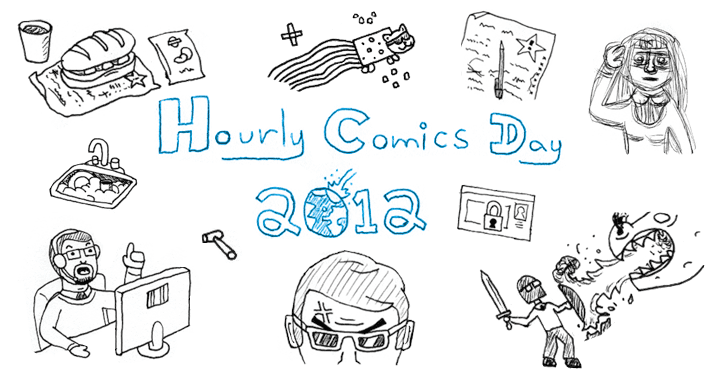 As evidenced by the above, the time came for my second entry to Hourly Comic Day! Since last year’s edition I’ve gained employment and moved house, so it took a few days to finish the sketches. More time passed before a scanner was obtained, but I uploaded rough camera pics for the interim. This link or the above image lead to this year’s submission.

END_OF_DOCUMENT_TOKEN_TO_BE_REPLACED

February was a busy month: After Hourly Comic Day (see previous post), I had a project to return to.

The Puffin Digital Prize 2011 is not so much a prize as a contest. Running from late November to February 28th, the brief was to storyboard a children’s picture book… for iPad. At least 2 spreads had to be fully finished, while the rest could be rough layouts & sketches.

The submission guidelines contradicted themselves, there was no hotline, and the hot-email-address server broke. Nevertheless, I persevered and got it done!

The end result is 775 words, with 9 finished images (6 complete pages), 24 doodles, and a pile of digital post-it notes.

…Alright, i’ll give you one image (and not the best one):

This contest also reintroduced me to Fineliner pens – I was a fool to ever let them go.
Here’s hoping for a shortlisting!

And now, on to the second item. A man in Hebden Bridge is taking a year out to teach himself and others about 3D filming, and he hopes to get a project going. Here’s his article from the local paper last week.
I went to the first meeting on Tuesday – he’s a thoroughly nice chap who knows his stuff, and you should have seen the test footage!

I’ve passed his article on to my old uni lecturer (now the Dean of Computing), to see if any undergrads are interested. If you’re interested, give H. Clegg a shout!

February 1st was Hourly Comic Day. Once a year, amateurs and professionals alike draw an hour-by-hour account of their day (ideally as the hour to be drawn is coming to a close). Some people ink & colour their pics later, while others just scan their doodles.

This year, I joined in for the first time. You can click the below image to view it.

The forum for this years event, where you can see dozens upon dozens of hourly comics, is right this way.

In other news, this site’s asthetic was bugging me, so i’ve upgraded it again!
To provide more visual interest and definition I introduced a coffee colour, shuffled things around, changed font sizes. Gradients appeared as I learned the wonders of -moz-linear-gradient and -webkit-gradient. Code’s been cleaned up.

Finally, I added a little Geek-ster egg which is easy enough to find (hint: less than 200 pixels down), but not that easy to figure out 100%. Tee hee.