The Stag Do was done and dusted. Now, with a few weeks to go until the nuptials, I could focus on building and buying various decorations and gifts for the wedding itself.

I’ve posted before about my “trilogy” of handmade greeting cards, which the couples received for their respective weddings. Above is the card I made for the newest newlyweds…
A pen drawing coloured in with watercolour paints, based on Potter Puppet Pals, writing (with a quick quotes quill) and… sysadmin stuff (a phone, displaying a monitor, displaying a skull and crossbones). Also featuring their cat in the middle.

I drew it out in pencil on A5 paper, then (to make things more complicated than necessary) scanned it in and moved elements around in Photoshop. I also roughly digitally coloured it.
Then I printed the lines out again at A6 size, with higher contrast, and traced it onto my watercolour postcards via the light box.

I’d run out of the ribbon used on the previous “trilogy” of cards, and it’s no longer sold. Can’t match the old set, then. New, red ribbon it is!

For the lettering inside I switched to watercolour pencils – you can wet the applied pencil to smudge it slightly!
The lettering is a neat font called Wanderlust Letters, with some leaves and a Buttercup added around the edge. Just like the cover, I traced it through using a printed template and a lightbox.

The presents were bought from Etsy. Thoughtfully chosen, but homemade by other people. Except for the letter ornaments below… which the Maid of Honour made, so all credit goes to her. 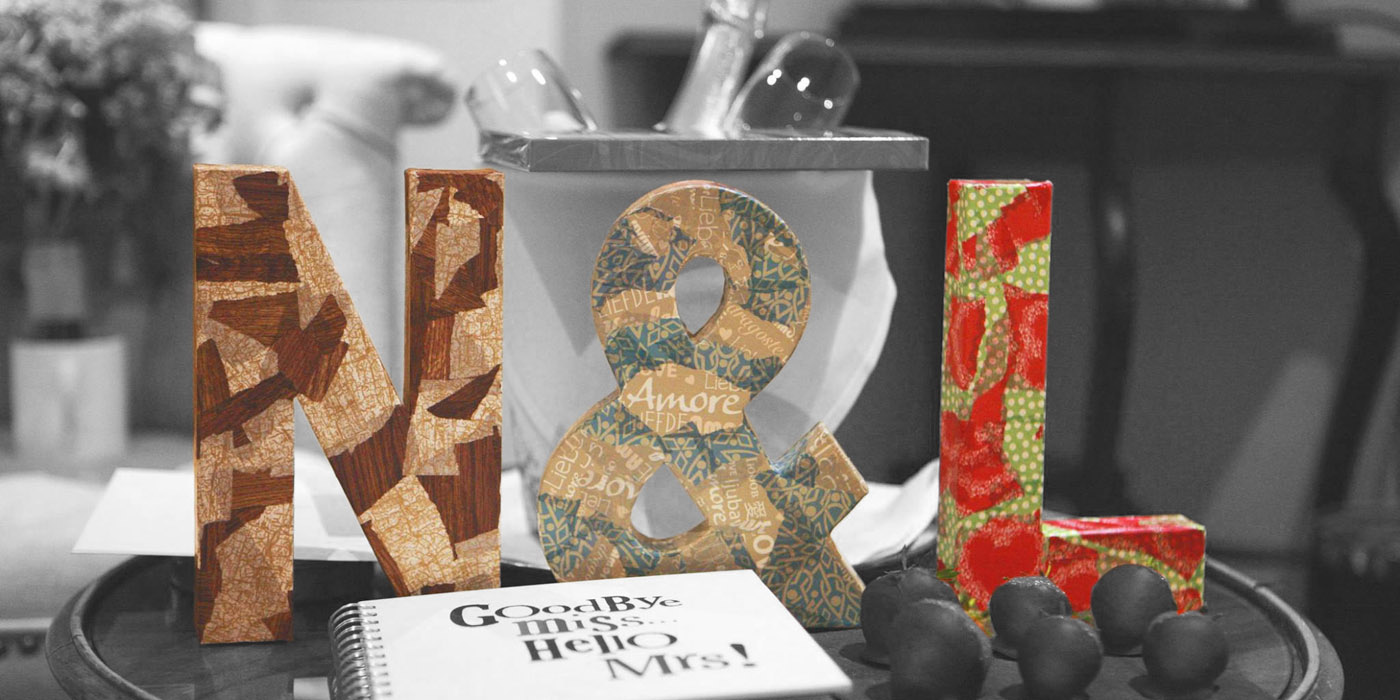 I’d also like to point out that mums are excellent for neat gift wrapping.

The happy couple’s cat couldn’t join them at the venue, and had to stay home alone (awww).
I took one of a mutual friend’s expert photos, and Photoshopped the cat to match the groom’s ‘uniform’ of flat cap and tie-less collar.

(It’s not a coincidence that the outfit resembles Luke’s from the Professor Layton games either.)

This was then printed out at Boots, put into a frame from The Range, and discreetly placed in the Bride and Groom’s rooms for the night before.

This next section didn’t require too much creativity, but the process still bears mention.

Their honeymoon is to Tokyo, so we decided that the decorations would be Senbazuru. An ancient Japanese legend promises that anyone who folds a thousand origami cranes will be granted a wish, such as happiness, good luck, or long life.

By the time inspiration struck me for this, I would have had to fold masses of cranes a day.
So I ordered them from Etsy. Quickly finding that completed sets can cost hundreds of pounds, I ordered a more “economical” set from halfway across the world…

They were dispatched late. Then I was given varying arrival dates, which meant the parcel could arrive weeks after the wedding. There was also a language barrier.
I had to formulate a backup plan.

Amazingly, no local florists sold petals! Not even for flower girls? Confetti? Nope.
A few packs of fake ivory petals would have to do, along with some alphabet bunting (arranged to spell ‘MR & MRS’) and a few LED white rose lights to string around the four-poster bed.

I bought some swanky wrapping paper from M&S, express ordered a heart stamp from Amazon, and got to work. 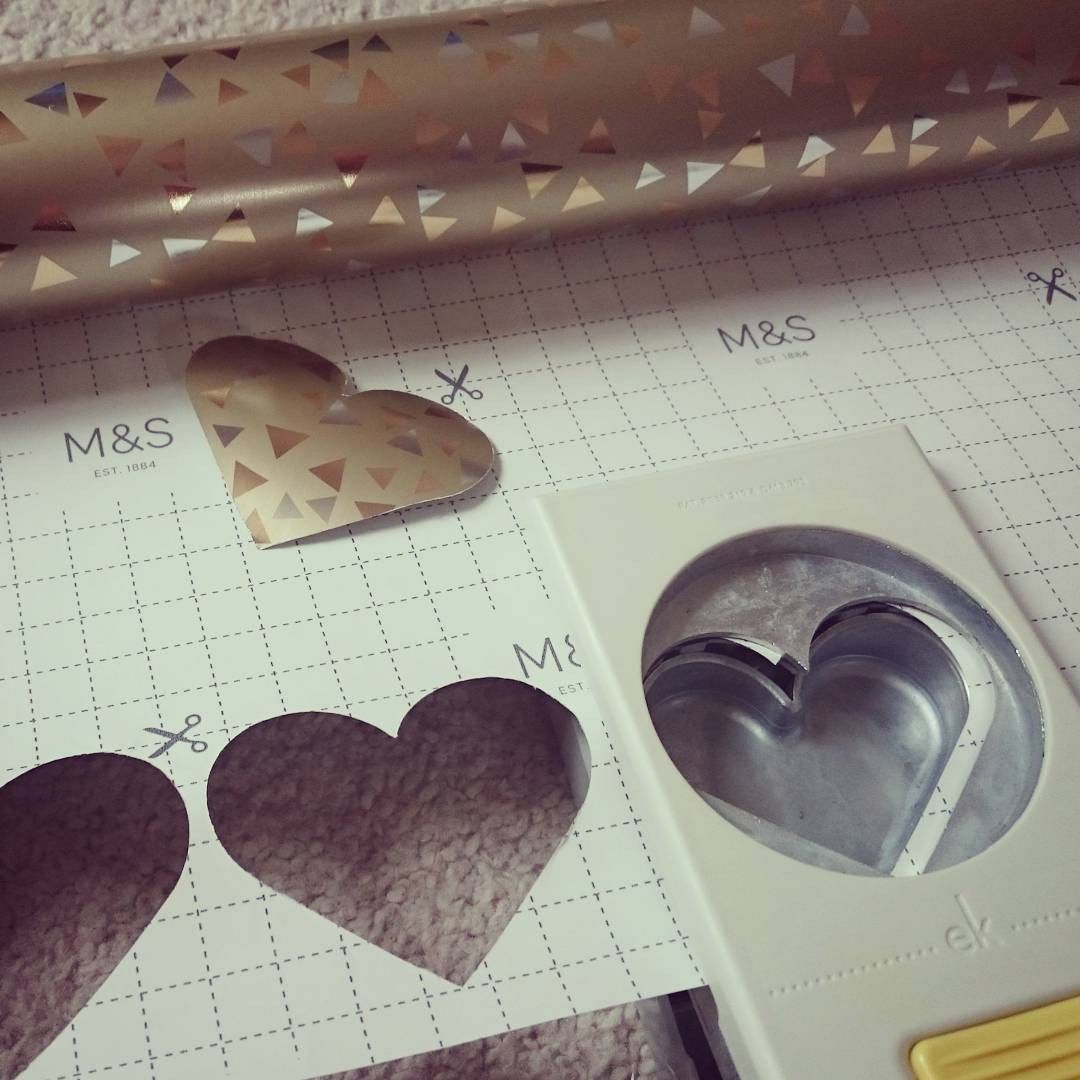 To make them double-sided, I glued the hearts back onto the roll and cut them out again. This was easier to do than expected for a reason that’s hard to describe… 2 layers of paper Vs 1 layer of paper has a certain feeling when working with scissors.

After a couple of nights of this, working away on the living room floor while watching TV, the backup plan was ready.

Then, the day before the wedding, hours before I left for the hotel… the thousand paper cranes arrived.
I was very lucky. 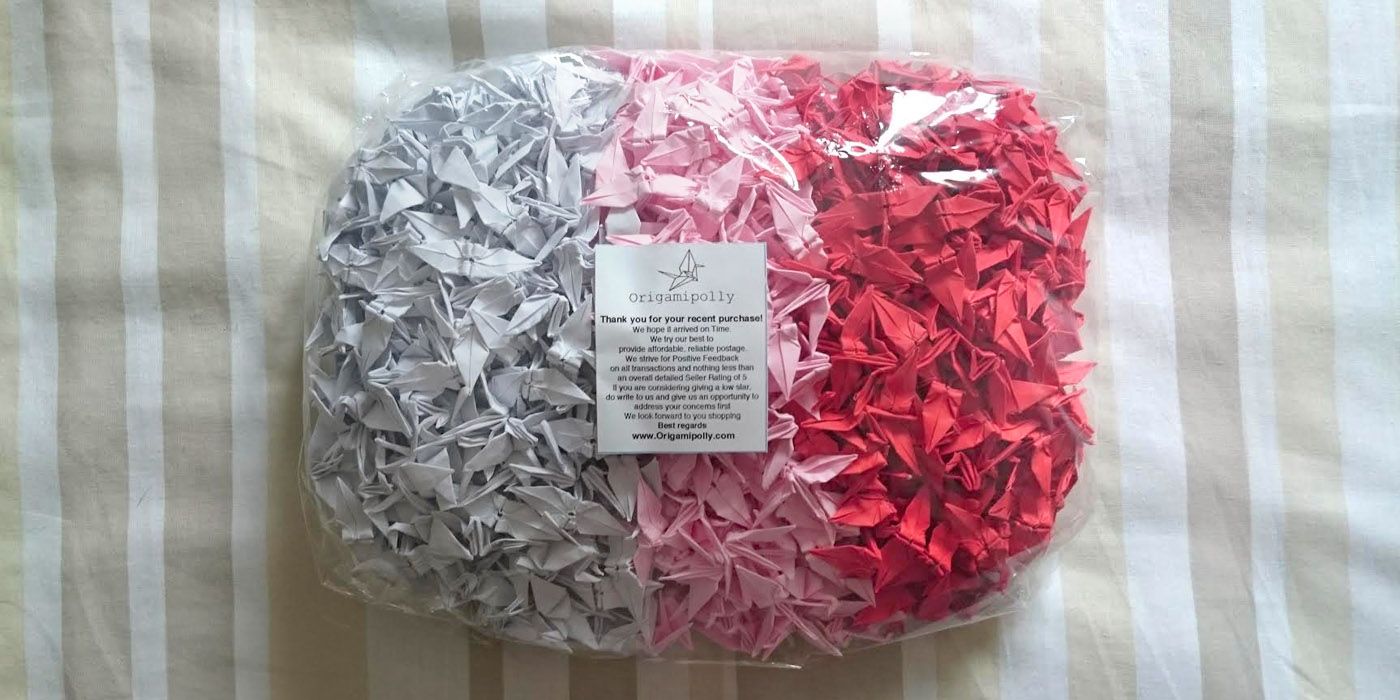 I handed everything over to the hotel staff, with instructions on how to lay things out. I was too busy to go and see the results, and all I’ve got is this little peek from the wedding photographer! 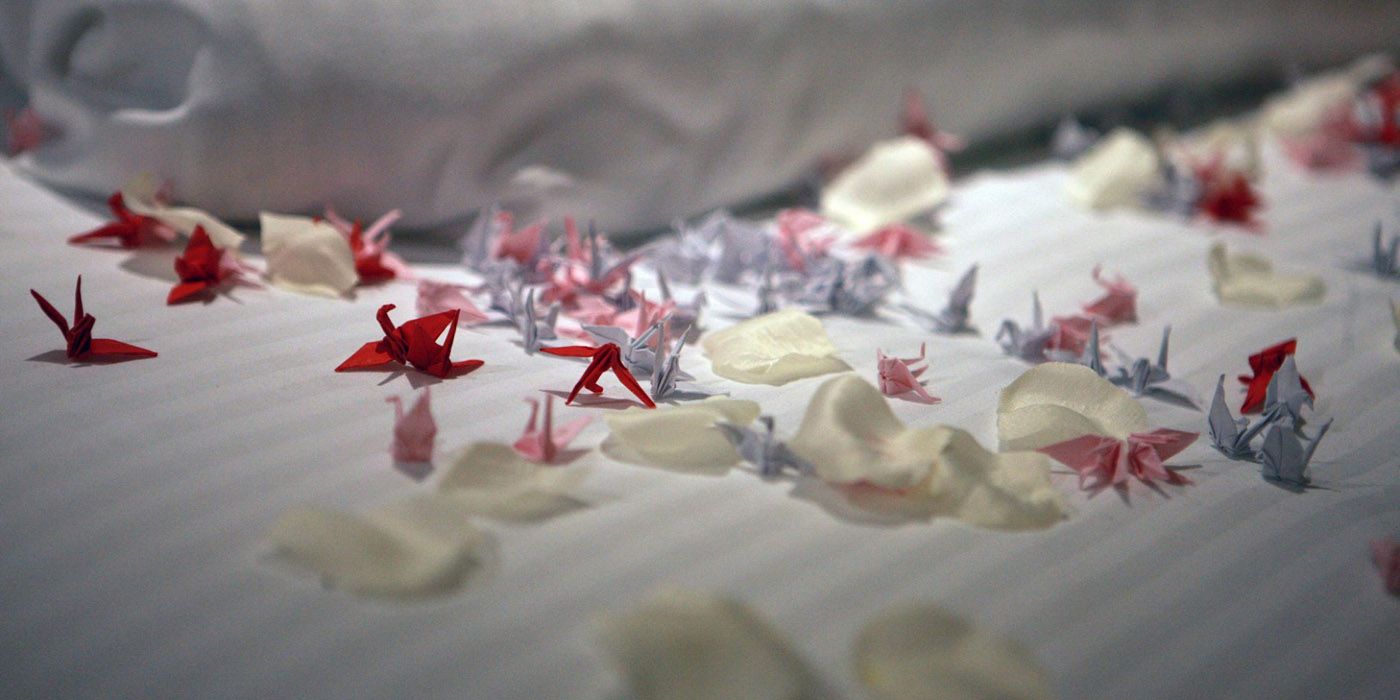 That’s the end of the wedding post trilogy. I’ll leave you with a photo of my phone case for the day. It’s one of those phone cases that you can put your own photo in, so I took this illustration by RONLEWHORN and adapted it.

Here’s your YouTube link to the Princess Bride reference. MAWWIAGE! 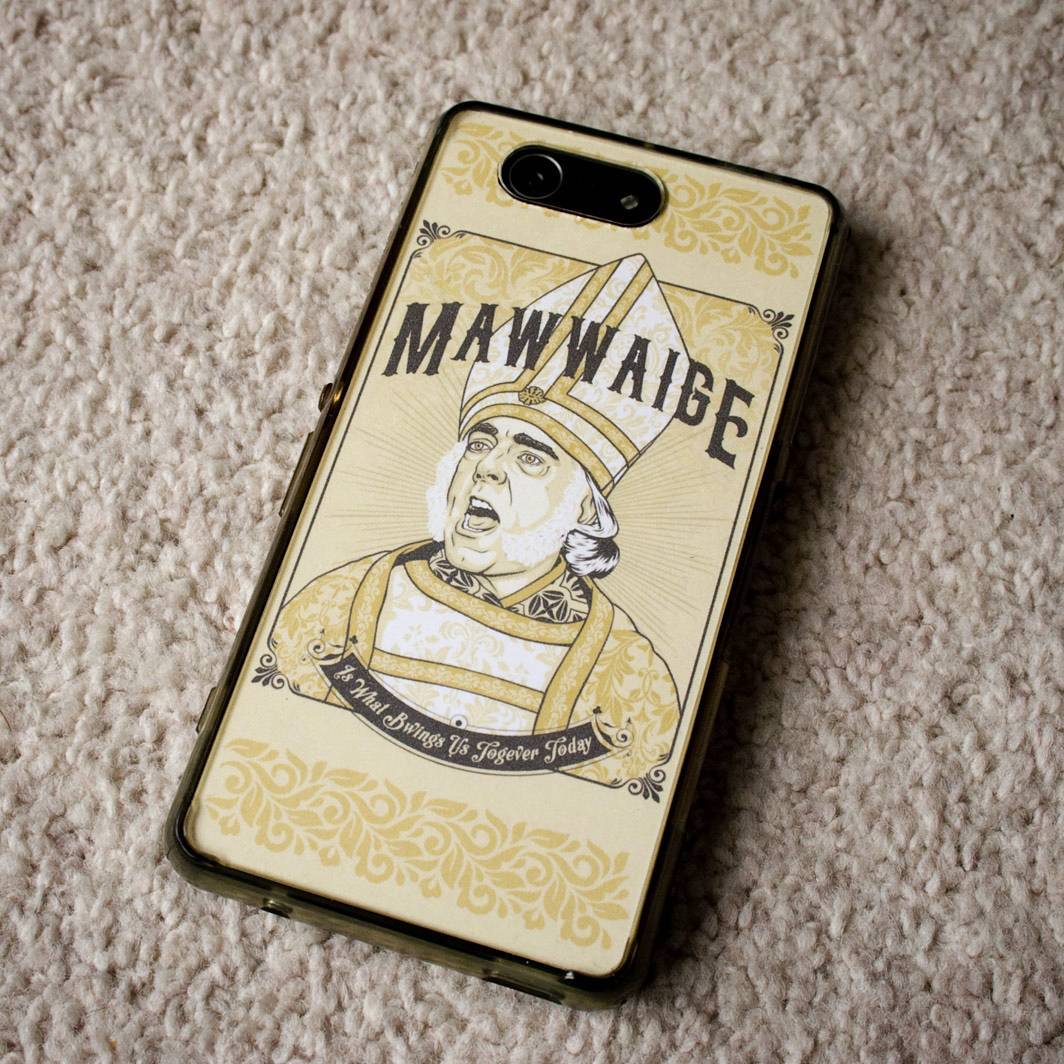