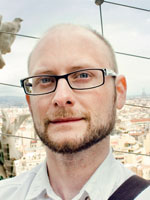 Carl Mitchell was born in the North of England, in 1984. With a future career in coal mining snatched from him by the government, the boy spent his spare time drawing; his father would bring home reams of paper specially. When computers became affordable for the home, he learned to harness megabytes of power in the name of imagery.

In his student days, the young ‘un grew to love Photoshop and Illustrator, but remembered that university was a time to experiment. Video production, compositing, 2D animation, 3D modelling, web programming… it all passed under his steely gaze and Nintendo Thumb.

Now he’s all grown up, editing wikis and rooting Android phones. Achievements include a 2:1 degree in Computer Animation & Special Effects, clothing sold by SplitReason.com, the children’s mascot for Cliffe Castle Museum… and being a full-time Graphic Designer.